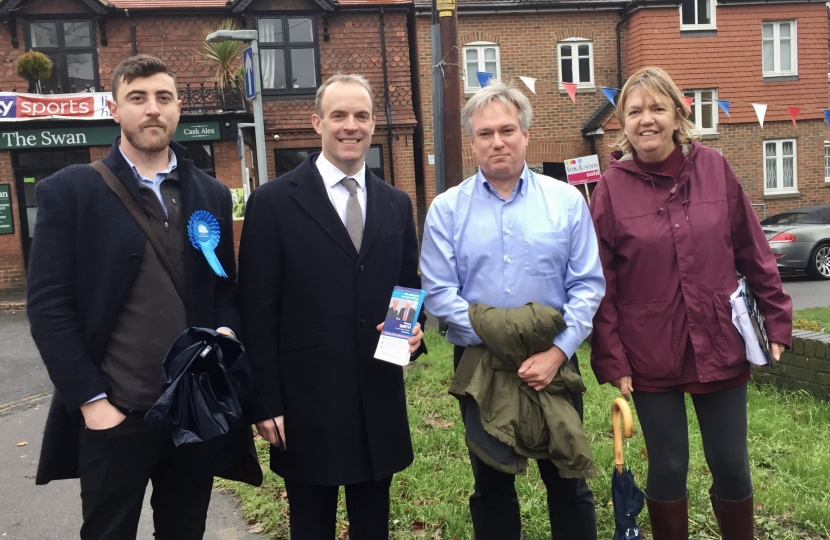 Conservative Parliamentary Candidate for Crawley, Henry Smith, has welcomed the First Secretary of State and Foreign Secretary, Dominic Raab, to the town (on Tuesday, 26 th November) to endorse his campaign to be re-elected as Member of Parliament for Crawley at the General Election on Thursday 12 th December.

“I’m grateful to the Foreign Secretary for taking the time to come to Crawley and speak with local residents about some of the most pressing issues facing the world today.

“We discussed a number of different subjects including the plight of the Chagossian people; many of whom have made Crawley their home. They deserve the right to return to their homeland after being forcibly removed by Harold Wilson’s Labour Government.

“I was also pleased to put the concerns I’ve received in support of the people of Hong Kong directly to the Foreign Secretary. A number of Crawley residents have contacted me in solidarity with the people of Hong Kong using their rights to protest and vote. If I’m fortunate enough to be re-elected as Crawley MP I’ll continue to stand up for democracy at home and abroad.

“In contrast to some, I’ve always been unequivocal that the United Kingdom is a force for good around the world. For example, at the United Nations in September, the Prime Minister announced £515 million to help get over 12 million children – half of them girls – into school, boosting economic growth and improving women’s rights in some of the poorest countries in the world.

“Only with a majority Conservative Government will we see an outward-looking Global Britain on the international stage.”

Henry Smith MP has welcomed official jobs figures which show that in the south east of England, there are now 4,673,609 people in work; meaning that 481,270 more people have the security of a job and a wage compared with 2010.