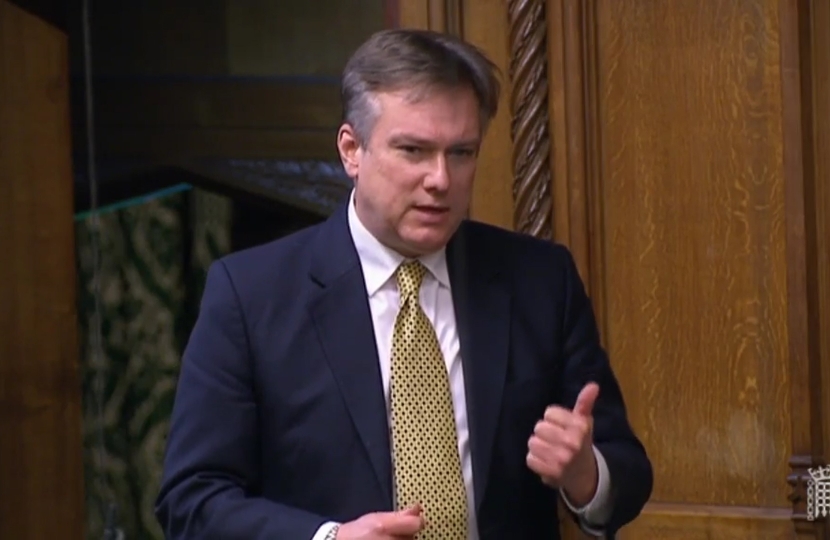 Henry Smith MP has hailed the work of the Department for International Trade and highlighted other areas in which the UK can chart its own course outside of the European Union, in a House of Commons debate yesterday (Monday, 11th January) on Global Britain.

In addition to welcoming the Government’s negotiation of trade agreements covering 63 nations and the European Union, the Crawley MP also spoke about the ways in which Britain can use its world standing to address issues such as human rights, climate change and education.

Commenting after the debate, Henry said;

“Outside the EU and its institutions, the United Kingdom has an opportunity to do things in a more outward-looking and forward-thinking way.

“We can use our strengths to address other issues, such as climate change and the salience of education, as well as the global pandemic.

“Global Britain also means challenging those who cause harm, and standing up for the persecuted. The actions of the Chinese dictatorship in Hong Kong and its abuses against the Uyghur Muslims in Xinjiang must be at the top of the international community’s agenda.

“These are issues which are raised with me by Crawley residents; as local MP and a member of the Commons Foreign Affairs Committee they’re also causes I’ll continue to pursue with Government.”

During the debate; on international trade, Henry said;

“We have continuing trade with our European friends and allies, and the ability, as we heard from the Secretary of State for International Trade in her opening remarks, to forge global trade deals with countries as far afield as Canada, Japan, Singapore, Turkey, Mexico and elsewhere. I know that in the coming months and years, more trade deals will be achieved.”

On using Britain’s position in the world to address global challenges, Henry said;

“Global Britain is not just about trade; it is about using our other strengths, which we have had historically as an island nation that is outward looking—whether they be in defence, intelligence, our soft and cultural power or our international aid commitments. I welcome the refocusing of those development commitments on tackling global crises such as climate change, pandemics—both the one we are facing and those we want to militate against in future—and that in education.

“Just as we should not only be focused on trade, vital though it is, we must not be afraid to challenge those in the world who do us and the global community harm. With China, there is its abuse of liberties in Hong Kong, its abuse against the Uyghur Muslims in Xinjiang and the fact that it was, at best, guilty of neglect in seeking to cover up the initial impacts of the COVID-19 epidemic, which grew into a global pandemic. As an international nation, we need to build a global alliance on such things to militate against them in future.”

Please click here for the full text and video of Henry's speech.