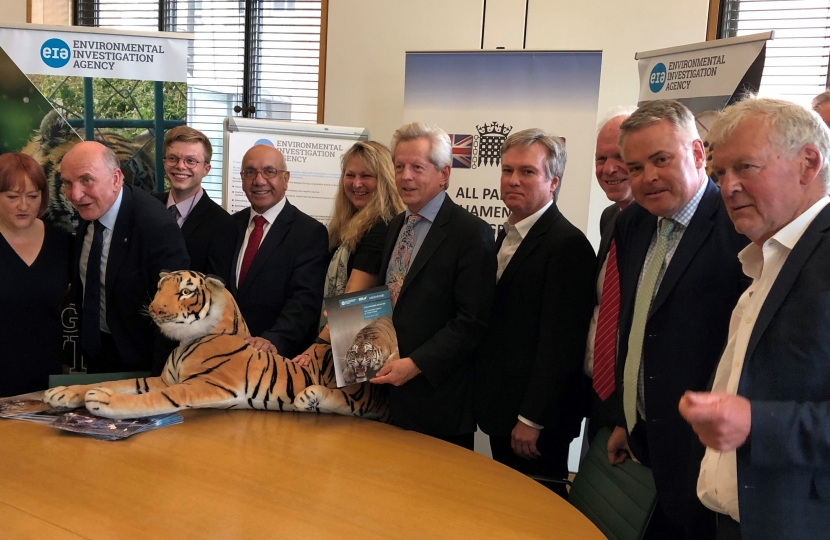 Henry Smith MP has called for urgent action to end the killing of tigers and other big cats by halting trade in their parts and products.

At an event co-hosted by the All-Party Parliamentary China Group and the Indo-British All-Party Parliamentary Group, along with wildlife campaigners from the Environmental Investigation Agency (EIA), the Crawley MP expressed serious concern over the existential crisis facing the world’s tigers and other big cats from killing to meet demand for body parts.

“The rate that tigers and other big cats are being killed for their parts and products is alarming. I welcome action to highlight this with the Chinese and Indian authorities and I’ll continue to urge the British Government to raise this matter at the highest levels.

“I know that many Crawley residents who share my love of animals will join me in supporting this initiative. As our town’s MP and Co-Chair of the All-Party Parliamentary Group for Animal Welfare these are just some of the causes I’ll continue to pursue with the new government.”

Fewer than 4,000 wild tigers survive and the species has already been hunted and traded to extinction across much of its natural range, particularly in South East Asia and China. Asia’s leopards have disappeared from 85 per cent of their historic range, while seizures from illegal trade show a minimum of 5,203 Asian leopards have been killed for trade since 2000 – the true total is likely many times higher.

All big cat species are being killed to meet demand for body parts, which comes mostly from Chinese consumers, for use in products such as traditional medicines, luxury home décor and jewellery.

The statement signed by Henry reads:

We are very concerned that illegal killing, driven by demand for their parts and products, is threatening the survival of wild tigers, leopards and other big cats. Losing these species would be an incalculable loss to communities and cultures worldwide, as well as the ecosystems upon which all life depends.

We call upon all governments worldwide to help end the demand for big cat products which is driving this killing, including by:

·         Banning all sales of big cat parts and products, including from captive sources

·         Ending breeding of big cats for trade in their body parts, which has not lessened pressure on wild populations but has instead stimulated demand

·         Supporting the Government of India’s recommendations to the Convention on International Trade in Endangered Species of Wild Fauna and Flora for urgent, time-bound actions to tackle killing and trade of big cats.

Demand for big cat products among Chinese consumers is currently exacerbated by policies in China which allow the sale of products made from big cat body parts, including tiger skin rugs from captive-bred or ’farmed’ tigers and traditional medicine products containing leopard bone. This legal trade sends a message to consumers that these products are acceptable and provides opportunities for criminal networks to launder illegally sourced big cat parts.

The situation is further worsened by the widespread availability of the parts and products of captive-bred tigers, of which there are more than 6,000 in China. Thousands of tigers are held in inhumane conditions at facilities explicitly established to breed them for trade in their body parts which offer zero conservation benefit to wild tigers; instead, thanks to consumer preference for wild tiger products and higher potential profit margins from poaching and trafficking wild big cats, the commercial breeding of tigers has helped maintain demand.