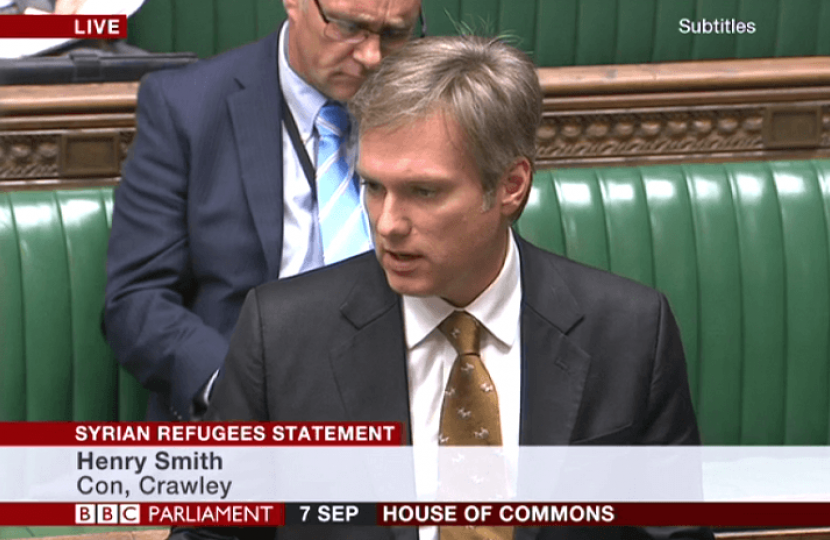 Henry Smith MP has called on Saudi Arabia and the Gulf states to do more to provide assistance in the Syrian refugee crisis.

“After the US, the UK is the largest humanitarian aid donor to Syria and neighbouring countries. It’s right that we use our relative wealth to help those in need directly in the region.

“The Prime Minister has confirmed that the United Kingdom will resettle 20,000 Syrian refugees over the next five years.

“While the UK is playing its part, states in the region itself also have a role to play.”

“The children of Syria are the victims of dictators, terrorists and traffickers. They are certainly not the victims of UK immigration policy, and therefore I commend and support my right hon. Friend the Prime Minister’s statement today.

“What discussions have been had with countries such as Saudi Arabia and the Gulf states on providing greater aid, taking refugees and supporting refugee camps around Syria?”

“My hon. Friend makes an important point. We have had those discussions and will continue to do so. The Arab world has provided some generous funding for refugee camps, but I am sure we will have further conversations with them.”

For video of Henry’s Question and the response from the Prime Minister, please visit: https://www.youtube.com/watch?v=LxTbo1eaP8E