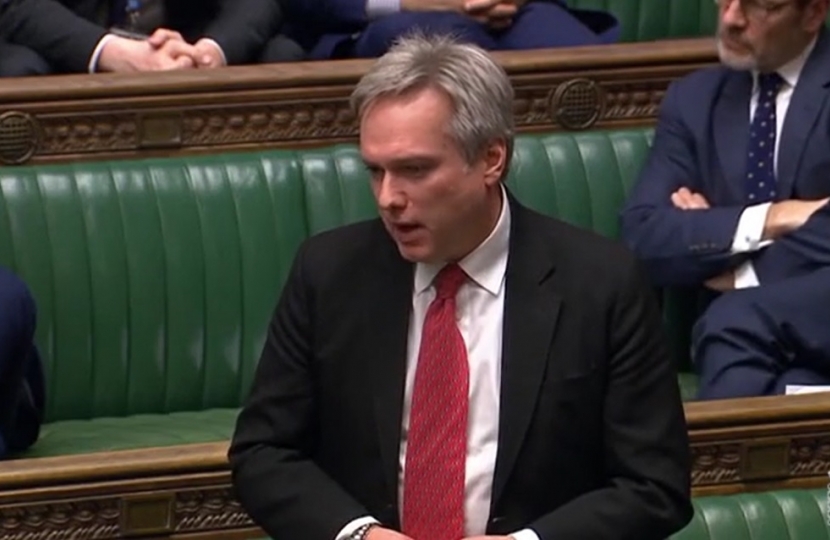 Henry Smith MP has spoken in the second reading of the NHS Funding Bill (on Monday, 27th January) in support of the Government’s plans to enshrine in law its commitment to increase funding for the National Health Service, and has called for further improvements to provision in Crawley.

Commenting in Central Lobby after his speech, Henry said;

“The NHS Funding Bill will guarantee the £33.9 billion annual boost for the NHS by 2023-24. This Bill includes a ‘double-lock’ commitment that places a legal duty on both the Secretary of State for Health & Social Care and the Treasury to uphold this minimum level of NHS revenue funding over the next four years.

“In Crawley, we need to see this funding going towards the issue of GP capacity. This is an issue which many local residents have raised with me and ensuring more GPs are recruited is an important part of the answer.

“While the new Urgent Care Centre is open 24 hours a day, seven days a week; as the natural population centre for the area, Crawley needs a new hospital – in no small part due to the time it can take to get to East Surrey. This is my call to the Government front bench.

“A couple of hours before my speech in the chamber I reconstituted the All-Party Parliamentary Group on Blood Cancer. I’m looking forward to continuing to chair the Group as I have done since its formation in 2016. We’ll be resuming work on our genomics inquiry as we discover how this new technology can deliver fascinating benefits to patients.”

During the debate; on services in Crawley, Henry said;

“Crawley Hospital’s maternity unit closed in 2001 and its accident and emergency department closed in 2005. Since 2010, services have been returning. We have a new urgent care centre, which is open 24 hours a day, seven days a week, and a new ward with new beds, but ultimately Crawley needs a new hospital because the nearest major hospital, East Surrey, is almost 10 miles away, up congested roads and with poor public transport links. Crawley is the natural population centre, so I would put in a bid to those on the Front Bench for a new Crawley hospital whenever that is possible.”

“One of the additional challenges we face in Crawley is GP capacity, so I was particularly pleased to hear the Secretary of State talk earlier about the importance of ensuring that more GPs come into our system and about the number of clinicians being recruited. We have a number of surgeries where the lists have been closed, yet we have huge pressure from additional housing, so I am grateful for the focus on that area. I am also appreciative of the focus on mental health provision.”

“Earlier today, I was very pleased to reconstitute the All-Party Parliamentary Group on Blood Cancer. It is a group that I was pleased to set up in the 2015-17 Parliament, and we are now restarting the genomics inquiry that we launched just before the Dissolution of Parliament in November. I encourage Members, and indeed the wider public, to contribute to that. We hope to report later this year.”

For the full text and video of Henry’s speech, please click here.